Moon Over Cosmo and Bellagio

With the NHL Playoffs going on, I just had to post this shot I took a couple of years ago as a tribute to the LV Golden Knights.

You see, Las Vegas holds a special place in my heart.  First and foremost, Eileen and I got married there.  We got married at the Imperial Palace on July 11th, 1993.  It was awesome and the best thing to happen to me!  Secondly, my first duty station in the US Air Force was very near Vegas; only about 45 miles NW of Vegas at a little base called Indian Springs Auxilary Airfield.  So as you can see, I have a little bit of a connection there.

Now, Las Vegas has a National Hockey League expansion team called the Las Vegas Golden Knights.  They are a scrappy bunch and fun to watch.  This is their first year and they actually made the playoffs!  Not only have they made the playoffs, but as of this writing they are one win from going to the Stanley Cup Finals.  Being from Michigan originally, I am a Detroit Red Wings fan and this is the first year that the Wings haven't made the playoffs in like 21 years.  With the Wings out, I find myself rooting for the Golden Knights in a big way!  Not only because they are an expansion team in Vegas, but they beat the San Jose Sharks in the last round.  I won't say why I am happy about that because it's rather stupid and personal, but I'm happy nonetheless.  Plus, the Knights have these over-the-top pre-game ceremonies that are just so "Vegas".  They are gaudy and cheesey and cool.  How can you not like them?!

Lastly, with the horrible and god-awful shit that happened last October, I think Vegas deserves something spectacularly awesome and I'm hoping the Knights could be that special something.  If they win the Stanley Cup, that would just be the best thing ever!

All that being said, here is a shot I took one early morning while we were visiting Las Vegas a couple of years ago. I went out early on one of the last mornings we were there and got this shot.  No one was out except the weirdos and the drunks.  Otherwise it was quite deserted.  If you do the same thing, make sure you have a tripod in case you need to clock someone over the head because they are drunk and want to know when the fountains shoot off or because you hear them talking about "ni**ers" on their phone in a weird foreign accent..  Just kidding!  Well not really, that actually happened except I didn't clock anyone, thank goodness.  In other words, be careful!  Not sure I would do that again. OK, Vegas isn't perfect, but what city is? 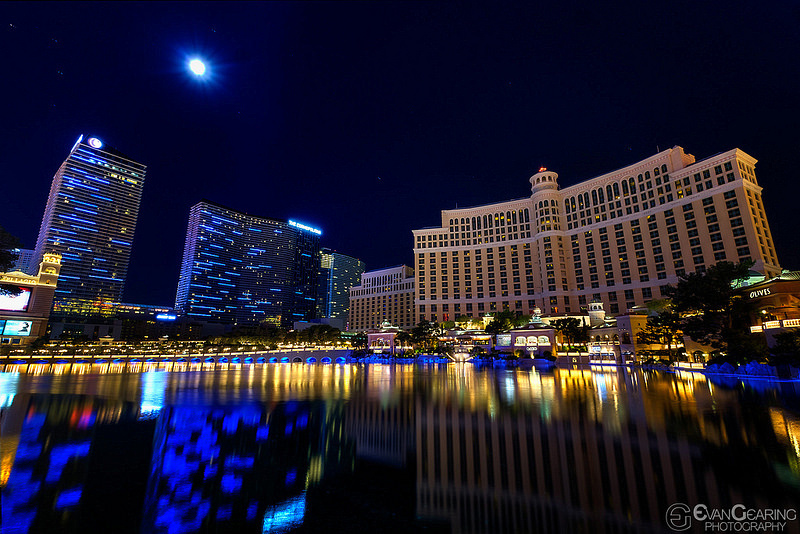